The Killer's Shadow - The Latest Book is Now Available! Click to Purchase
From the monthly archives: "July 2014"

Guess Who’s Not Coming to Dinner 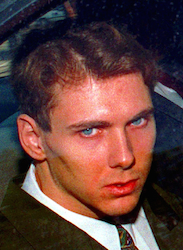 Paul Kenneth Bernardo, known as the “Scarborough Rapist,” is one of the worst serial sexual predators Canada has ever produced. Between 1987 and 1992, this charming and handsome accountant murdered at least three women and savagely assaulted and raped a multitude of others.  Among those he raped and killed was the younger sister of his wife, Karla Homolka, with Karla’s active compliance. Karla received a reduced sentence for agreeing to testify against her former husband and is now out of prison.

John Douglas’s FBI unit profiled the then-UNSUB after the abduction, rape, torture and murder of St. Catharine’s, Ontario schoolgirl Kristin French, and helped in tracking him down. We covered the case in our book, Journey Into Darkness.

Bernardo currently resides at Millhaven Institute in Bath, Ontario, where we hope he will remain for the rest of his natural life, though his sentence does not preclude the possibility of parole.

And it seems as if he might be about to get himself another wife.