The Killer's Shadow - The Latest Book is Now Available! Click to Purchase
If You Don’t Have Anything to Say, Then Please Don’t Say It It’s All About the Evidence

A Choice of Weapons 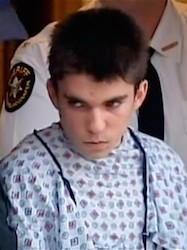 The grim ledger of criminal justice does not account itself by the same principles as some other realms of life. There is never a completely positive outcome. All entries are judged on a scale of how bad they are, against how bad they could be.

And by this metric, yesterday’s tragedy at Franklin Regional High School in Murrysville, Pennsylvania, offers some instructive perspectives.

We don’t know why 16-year-old Alex Hribal allegedly attacked 21 of his classmates in the hallway of his school in this quiet community 20 miles east of Pittsburgh. We can listen to his fellow students describe him alternately as a really nice kid and a quiet guy without many friends who pretty much kept to himself and nod knowingly because we’ve heard these descriptions so many times before. We can speculate about all of the “usual” reasons teenaged boys launch into attempted mass murder scenarios. But let’s admit that at this stage, we really have no idea what was going on inside his head.

But here is what we do know: At this writing, all of the victims are alive, and it is highly unlikely that would have been the case had the attacker used guns instead of knives.

This is not to suggest the crime was any less vicious in intent, and many of the victims suffered grievous wounds. But a knife is not quite so “efficient” in its purpose in a mass assault situation as a firearm, and so at least there was time to get the most severely injured to Forbes Hospital where the excellent emergency department and surgical staffs were able to stabilize them and set them on the road to recovery. They likely would not have had that opportunity with bullet wounds inflicted at such close range.

Over and over again, after each new mass shooting, we hear the familiar refrain that if the killer didn’t have a gun, he still would have done what he did; he just would have used a different weapon.

True, but as we have just seen in Murrysville, the outcome could be substantially different. And in this case, 21 young men and women are likely to grow into adulthood and full lives as a result.

6 Responses to A Choice of Weapons