A Matter of Expectation 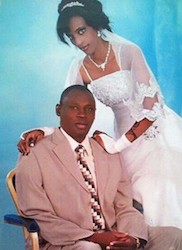 Meriam Ibrahim and her husband

Why is it that coverage of the Amanda Knox-Raffaele Sollecito trials for the murder of Meredith Kercher has been a worldwide news staple for more than half a decade now, yet the case of Meriam Yahya Ibrahim, recently sentenced to death in Sudan for renouncing Islam, got only a single day in the world media headlines? In today’s New York Times it was reduced to one paragraph in a news roundup at the bottom of Page A14.

Is it because Amanda and Meredith were pretty, white girls of the West and Meriam is a pretty, dark-skinned African Middle Easterner? We don’t think so. While race and ethnicity do figure in many legal injustices, they are irrelevant in this case.

So why has the Kercher-Knox case received so much attention and this one will practically slip past under the radar?

In a word: Expectation.

The specific crime for which a court in Khartoum handed down a death sentence against Ms. Ibrahim (the same age Ms. Knox is now) is apostasy. She is the daughter of a Sudanese Muslim father and an Ethiopian Christian Orthodox mother. Her father left the family when she was a child and her mother raised her as a Christian. But according to Sudanese law, children must adhere to their fathers’ faith. By the way, Muslim women in Sudan may only marry Muslim men, but Muslim men may marry anyone they like.

Because of that law, Meriam is also charged with adultery, since she married a Christian man. For this additional crime, her punishment is 100 lashes. She is eight months pregnant with her husband’s child and it is the practice of the government to wait until this baby is weaned before brutally whipping and executing her.

But back to our main point. We think the reason Amanda’s story is so much more resonant in the Western media is because it took place in Italy, a nation where our expectations of justice and shared values are high. We feel the same way about the Knox-Sollecito case as we do about the West Memphis Three case in our own country. We are better than this kind of injustice, and so is our system. We respect and admire Italy. It is a wonderful country with a rich culture and a presumption of treating its citizens and visitors fairly – just like us. So when this doesn’t happen in either nation, we are understandably outraged. And we feel like we can do something about it.

Had Amanda and/or Raffaele been unjustly convicted of murder in North Korea, for example, we would have felt sorry for them, but our general reaction would have been, “What do you expect in a country like that?”

We talk of cultural relativism and equal respect for other people’s beliefs.

It is now politically correct and fashionable to suggest that we must not judge other societies against our own. This perspective suggests a moral equivalence between value systems that are merely different from ours.

This is nonsense. Any society that kills people for their beliefs, or lack of beliefs, does not have equivalent values. It has inferior values. So while we are appalled by the Sudanese court’s barbaric verdicts against Meriam Ibrahim, we are not surprised or shocked by them.

As we are when it happens in Italy, or right here at home. Because, like the Italians and others who share our values, we’re better than that.

3 Responses to A Matter of Expectation