The Killer's Shadow - The Latest Book is Now Available! Click to Purchase
Challenging the Constitution in Virginia Paying Attention to the Deniers 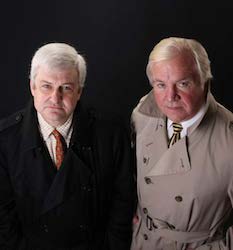 There has been a fair amount of discussion lately, from the Supreme Court on down, about the necessity and appropriateness in this day and age of preferential admissions treatment for various minorities at highly selective universities. And while those discussions are a necessary part of the social and legal conversation, I happen to think they miss a major point.

Because no one is talking about what I call the “Ivy League Racket.”

Some years ago, John Douglas and I participated at a presentation on criminal justice at the University of Pennsylvania in Philadelphia. I spoke first, and said something to the effect of, “It is gratifying to be asked to speak at a university that turned me down for college, and would have turned John down had he applied.”

And here’s my point: It is now extremely difficult to get into the top colleges and universities, even more so than when baby boomers John and I applied. You have to be practically a superman or woman to be accepted.

Which begs the question, So what are these institutions actually accomplishing?

If you take only the top high school students from around the world, and four years later, turn out the top college students, what’s the big deal? Any fool can do that. It’s the educational equivalent of what we in criminal investigative analysis refer to as “confirmation bias,” by which you’ve already made up your mind about the outcome and are just collecting “evidence” to prove it.

If, on the other hand, you accepted the worst high school students, or even ordinary ones, and four years later turned out the top college students, then you’d really be doing something. Remember the Eddie Murphy-Dan Aykroyd movie, Trading Places, in which two high finance bizillionaires experimented to see whether situation and contacts could make their nephew and a street hustler into each other?  But that is something these institutions will never attempt, because they know they would fail and it would expose the Ivy League Racket once and for all. Like so many others we have written about, they would be afraid of evidence.

So what the Ivies and the others of their ilk actually are, I think, are fancy “finishing schools.” It isn’t that their education is so much better, it’s that they select the best and let them associate with each other for four years, then go out into the world to make contact with fellow alumni and continue to rule.

So instead of the top schools fretting about whether they have to admit a super-accomplished minority candidate over a super-super-accomplished white male, how about taking some folks like us and seeing what you can do with them?

Not that we’re bitter or anything.