Best Wishes for the New Year

We thank all of our readers and contributors for their interest, passion and commitment to www.mindhuntersinc.com over the past year. Your comments and reactions have been an education and inspiration to us. We hope you and yours all have a happy, healthy, productive and safe 2014.

With all best wishes,

All the Pretty Witches

Eric Dezenhall, the nationally known and respected president of Dezenhall Resources, a leading crisis management and communications firm in Washington, D.C., wrote the following column, which appeared yesterday on Huffington Post. As it quotes John Douglas and Mark Olshaker and deals with a subject important to us, we wanted to share it with our readers.

In the vortex that swirls from today’s media and legal climate, motivated authorities may not have enough to send you to jail, but they certainly have enough to ruin your life.

And they don’t need much.

This week, the retrial of Amanda Knox and Raffaele Sollecito begins in Florence for the 2007 murder of Meredith Kercher. Knox and Sollecito were once convicted and then, in 2011, found innocent on appeal. Their acquittal was accompanied by a scathing assessment of the methods of the prosecution.

But now it all begins again. 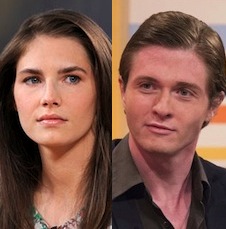 The press briefing on the retrial of Amanda Knox and Raffaele Sollecito in the 2007 murder of Meredith Kercher in Perugia, Italy, scheduled for this morning at the US Capitol, has been postponed due to the government shutdown.

Judge Heavey will appear on the Piers Morgan program on CNN this evening with Mr. Sollecito and his American attorney, John Q. Kelly.

A panel of experts will address congressional members and staff on the third trial of Amanda Knox and Raffaele Sollecito during “Update and Briefing on the Amanda Knox and Raffaele Sollecito Case,” a congressional briefing hosted by Sen. Maria Cantwell (D-WA) and Rep. Adam Smith (D-WA9) at the U.S. Capitol Visitor Center, Room SVC 203, on Wednesday, October 2, 2013 from 9:30 to 11:30 a.m. The trial is scheduled to begin on September 30, 2013, in Florence, Italy.

END_OF_DOCUMENT_TOKEN_TO_BE_REPLACED

This article was originally supposed to be published for Il Messaggero. It was given to me as an assignment, after the editor and legal expert of the newspaper saw the Maxim interview with famed FBI profiler, John Douglas, in the January 2011 issue.

When the article was turned in, albeit shortened, my editor told me – “We can’t print this article. It’s too dangerous to print in Italy”.

So, for your reading pleasure, the article too dangerous for Italy.