The Killer's Shadow - The Latest Book is Now Available! Click to Purchase
God and Man in Dayton Hellish Creatures? 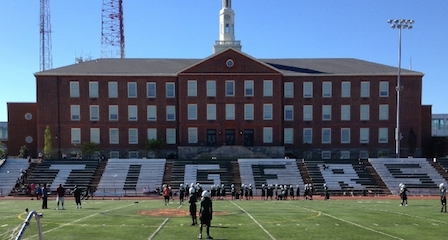 My public high school – Woodrow Wilson High in Washington, DC – has graduated such luminaries as business titan Warren Buffett, novelist Anne Beattie and my friend, columnist and commentator Frank Rich, among others of high accomplishment. But now, after nearly three quarters of a century, it has achieved the ultimate validation of moral worth.

It is to be picketed by members of the Westboro Baptist Church.

This supposedly fundamentalist church in Kansas, whose membership is negligible, has achieved its notoriety by protesting and picketing at the funerals of brave servicemen and women with particularly odious and disgusting messages to the effect that the deaths are God’s punishment for our tolerance of homosexuality and other non-specified acts. Therefore, to be the object of Westboro’s hate-filled venom has become, among right-thinking folk, something of a badge of honor, akin to having been named to President Richard Nixon’s Enemies List, among upstanding liberals.

The focus of Westboro’s ire is the school’s second annual Pride Day, to be held Monday, June 9. As quoted in this past Wednesday’s Washington Post, 15 year-old sophomore Neilah Rovinsky stated, “The message of Pride Day is that as a public school in our Nation’s Capital, we support LGBTG+ students, and we are committed to making our school and our Capital a safer and more welcoming space for everyone.”

Seems to me that is what education and free thought are all about.

Westboro, almost unique in its per capita concentration of hatred, prejudice and ignorance, counters on its website, www.godhatesfags.com, “You should be hanging your heads in shame for such a thing.”

Well, guess what, you filthy and perverse evil-mongers – I have never been more proud to be a “Son of Wilson” (as our school song has it).

And as Neilah put it, “I do know that as a school community, we will stand up for all of our students. Westboro has decided to go against the wrong school and the wrong city this time.”

You go, girl! Every fair-minded alumnus and alumna will be with you in spirit. And may schools across the nation follow your noble and courageous lead.