The Killer's Shadow - The Latest Book is Now Available! Click to Purchase
The Insanity Will Continue Go Wilson!

God and Man in Dayton 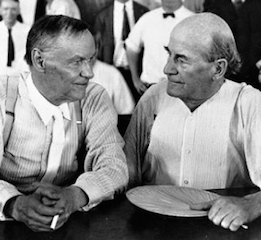 Am I the only one who thinks this is funny?

Bryan College is an evangelical Christian school in Dayton, Tennessee, the location of the celebrated 1925 Scopes trial that pitted atheist attorney Clarence Darrow against fundamentalist politician William Jennings Bryan over the legality of teaching Darwinian evolution in the public schools. The college is named for Bryan, the titular winner of the case, who died in his sleep five days later, some say from the strain of the ordeal.

A similar conflict is being played out right now.

“Since Bryan College’s founding in 1930, its statement of belief, which professors have to sign as part of their employment contracts, included a 41-word section summing up the institution’s conservative views on creation and evolution, including the statement: ‘The origin of man was by fiat of God.’ But in February, college officials decided that professors had to agree to an additional clarification declaring that Adam and Eve ‘are historical persons created by God in a special formative act, and not from previously existing life-forms.'”

“I don’t think you have to believe the Bryan way in order to be a strong evangelical,” he said. “But this is Bryan College, and this is something that’s important to us. It’s in our DNA. It’s who we are.”

In the words of Dr. S. Steven Potter, Professor of Developmental Biology and founder of the Potter Lab at the Children’s Hospital Medical Center in Cincinnati, who is widely published on the subject, “DNA proves evolution.”

One Response to God and Man in Dayton