The Killer's Shadow - The Latest Book is Now Available! Click to Purchase
When Pictures Deceive The Othello Murder Case 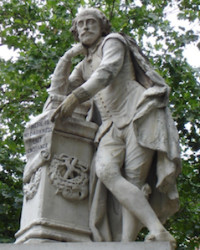 Today marks the 450th anniversary of the birth of William Shakespeare, the greatest creative genius who ever lived. There is virtually nothing to say about the human condition,  of good, evil, love, hate, honor, jealousy, motive, prejudice, conspiracy, courage, cowardice, rationality, madness, homicide, suicide, fairness, injustice, innocence, guilt, evidence – in other words, all of the things that concern us in criminal justice and every other field of endeavor – that Shakespeare did not say first, and better.

I do not think it is an exaggeration to agree with Yale Professor Harold Bloom that our modern concept of ourselves as human beings derives directly from Shakespeare.

Inscribed above the door at the west end of the Great Hall of the Folger Shakespeare Library in Washington, D.C. is a four-line testimonial from the 19th and early 20th century American poet and literary critic William Winter, that speaks as eloquently as any I have seen:

“There is not anything of human trial
That ever love deplored or sorrow knew,
No glad fulfilment and no sad denial,
Beyond the pictured truth that Shakespeare drew.”