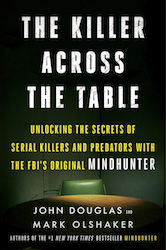 The legendary FBI criminal profiler, number-one New York Times bestselling author, and inspiration for the hit Netflix show Mindhunter delves deep into the lives and crimes of four of the most disturbing and complex predatory killers, offering never-before-revealed details about his profiling process, and divulging the strategies used to crack some of America’s most challenging cases.

The FBI’s pioneer of criminal profiling, former special agent John Douglas, has studied and interviewed many of America’s most notorious killers—including Charles Manson, ”Son of Sam Killer” David Berkowitz and ”BTK Strangler” Dennis Rader—trained FBI agents and investigators around and the world, and helped educate the country about these deadly predators and how they operate, and has become a legend in popular culture, fictionalized in The Silence of the Lambs and the hit television shows Criminal Minds and Mindhunter.

Twenty years after his famous memoir, the man who literally wrote the book on FBI criminal profiling opens his case files once again. In this riveting work of true crime, he spotlights four of the most diabolical criminals he’s confronted, interviewed and learned from. Going deep into each man’s life and crimes, he outlines the factors that led them to murder and how he used his interrogation skills to expose their means, motives, and true evil. Like the hit Netflix show, The Killer Across the Table is centered around Douglas’ unique interrogation and profiling process. With his longtime collaborator Mark Olshaker, Douglas recounts the chilling encounters with these four killers as he experienced them—revealing for the first time his profile methods in detail.

Going step by step through his interviews, Douglas explains how he connects each killer’s crimes to the specific conversation, and contrasts these encounters with those of other deadly criminals to show what he learns from each one. In the process, he returns to other famous cases, killers and interviews that have shaped his career, describing how the knowledge he gained from those exchanges helped prepare him for these.

A glimpse into the mind of a man who has pierced the heart of human darkness, The Killer Across the Table unlocks the ultimate mystery of depravity and the techniques and approaches that have countered evil in the name of justice.

THE BLOOD OF THE LAMB
Joan D’Alessandro in the Brownie uniform she was so proud of. (Photo by Rosemarie D’Alessandro)

THE BLOOD OF THE LAMB
Joan’s Brownie uniform, carefully preserved by Rosemarie, spread out on Joan’s bed. (Photo by Mark Olshaker)

THE BLOOD OF THE LAMB
Joseph McGowan. (New Jersey Department of Corrections Photo)

THE BLOOD OF THE LAMB
The house Joseph McGowan shared with his mother and grandmother, where he killed Joan D’Alessandro. (Photo by Mark Olshaker)

THE BLOOD OF THE LAMB
Joan’s grave.

THE BLOOD OF THE LAMB
Rosemarie at the dedication of the Joan D’Alessandro memorial in Hillsdale, New Jersey.

THE BLOOD OF THE LAMB
John Douglas, Rosemarie D’Alessandro and Andrew Consovoy, former New Jersey State Parole Board chairman Andrew Consovoy at a 2013 celebration of Joan’s life and legacy. (Photo by Mark Olshaker)

THE BLOOD OF THE LAMB
John and Rosemarie D’Alessandro, Mark Olshaker, John Douglas and Michael D’Alessandro, in front of the stairs Joan bounded down as she went to complete her Girl Scout cookie order. (Photo by Carolyn Olshaker)

THE BLOOD OF THE LAMB
Andrew Consovoy and John Douglas with Joan’s photograph. (Photo by Mark Olshaker)

NO ONE MADE ME DO ANYTHING
Spartanburg County sheriff’s deputies rescue Kala Brown from the Conex shipping container in which Todd Kohlhepp imprisoned her. ((Spartanburg County 7th Circuit Solicitor’s Office photo)

NO ONE MADE ME DO ANYTHING
Maria Awes and John Douglas search for bodies Todd Kohlhepp claimed he buried. (Photo by John E. Douglas, Jr.)

NO ONE MADE ME DO ANYTHING
John Douglas being filmed for the Investigation Discovery series, “Serial Killer: The Devil Unchained” as he searches for bodies Todd Kohlhepp claims he buried. (Photo by John E. Douglas, Jr.)

NO ONE MADE ME DO ANYTHING
Committee Films Producer/Director Maria Awes, Captain Steve Cooper of the Spartanburg County Sheriff’s Office and John Douglas, as they search for bodies Todd Kohlhepp said he buried. (Photo by John E. Douglas, Jr.)