The Killer's Shadow - The Latest Book is Now Available! Click to Purchase
No Answers or Questions Who, Ripper?

Maybe the Framers Were Even Cleverer Than We Thought 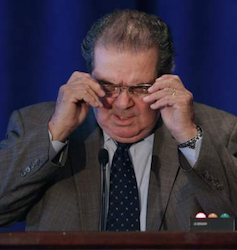 One more thought about gun control and the Constitution.

Among the staunchest legal defenders of the Second Ammendment is Supreme Court Justice Antonin Scalia. When commentators describe him as an “originalist” or a “strict constructionist,” His Honor corrects them, saying he is a “textualist,” meaning that the text says what it says – nothing more or less – and if you want to interpret what the Framers had in mind, you have to go strictly by the text. If the Constitution has nothing to say on a given subject, then it is up to state and/or federal legislatures to create the law. But if it is included in the text of the Constitution, then that is the law unless or until a Constitutional ammendment to the contrary is passed.

Automobiles (driving tests and licenses) and smoking (government restrictions) are not mentioned in the text, but arms – that’s a different story, and it cannot be infringed.

But there may be a textual solution to our massive gun problem.

Let’s not get all silly and pretend that the right of the people to keep and bear arms refers to those body parts that extend from our shoulders to our hands. But a close reading of the text of the Second Ammendment may just reveal the Framers’ original intent:

“A well regulated Militia, being necessary to the security of a free State, the right of the people to keep and bear Arms, shall not be infringed.”

Okay, now, you don’t have to be a Constitutional scholar to see that the Framers tied the right to the need for a well regulated militia. But more important, if we are going strictly by the text, while the right of the people to keep and bear Arms shall not be infringed, there is absolutely nothing there about the right to have ammunition.

Justice Scalia, it just ain’t there in the text.

This can’t be an oversight. The rest of the document is too well drawn and the Bill of Rights too carefully constructed to include items not included in the Constitution itself. Therefore, it must have been the Framers’ intent that the people should keep and bear arms so they could quickly respond to the call to raise a militia, but the state would keep the ammunition until such time as it was needed. Otherwise, they would have left off the part about the well regulated militia and just proclaimed that the right of the people to keep and bear arms and possess ammunition shall not be infringed.

So let any damn fool who wants one in this crazy society have a gun; it’s your right. Just remember that you have no Constitutional right to bullets. They’re for the well regulated militia.

After all, it’s what the Framers wanted.