The Killer's Shadow - The Latest Book is Now Available! Click to Purchase
Assessing Violent Behavior: What Does It Take? Criminal Arrogance 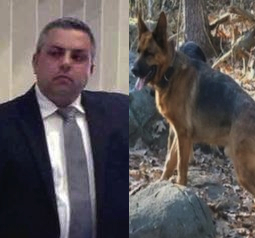 Detective Jeff Majewski of the Westport, Massachusetts Police Department is an admired and intrepid law enforcement agent, and so was his dog, Siren. Overnight last April, the five-year-old German shepherd, who was in training as a search and rescue dog, died painfully as internal hemorrhaging pressed against his spinal cord. An autopsy – or necropsy as it is called with animals – revealed rat poison in Siren’s liver. Detective Majewski is convinced it was intentional – to get back at him for something.

Whoever this despicable individual is has chosen the wrong target. When a cop is murdered, the other cops see to it that the killer doesn’t get away with it.

The same is true for cop dogs.

Majewski is both a tough and sensitive detective. The Children’s Advocacy Center of Bristol County recently called him a hero for the way he handles abused children, giving them the courage to tell that someone has abused them. On his own time, he and his girlfriend had been training Siren for search-and-rescue certification in Massachusetts and Rhode Island.

As he wrote in an open letter published on July 24th by the East Bay Newspapers chain:

“Siren was a family member, a trusted companion, a guardian and a friend – the kind of friend who listened without judgment, shared life experiences and helped you get through tough days at work.

“But above all this dog had a higher purpose. He had been training for one year as a Search and Rescue dog. One day that dog might have found a missing child or helped to locate an elderly person who wandered off from home.

“A few days ago we learned that Siren’s necropsy revealed poison in samples of his liver. He had been killed.

“I have been a Westport police officer since 1989. In the last 25 years I have arrested many people and sent an assortment of them to jail and prison. I have done all this and put myself in harm’s way for a greater purpose. I have done my job at a sacrifice to my family’s needs and wants.

“I have treated crime victims and even some deserving suspects with empathy. It is a word that is many times discarded in today’s world. As I wrote this letter I tried to think of what caliber of person would hide in the shadows with the intent to target an animal in a fenced-in yard. Part of my job is to profile people’s behavior and try to figure out what drives them to do the things they do so I can solve crime. In the past 25 years I am sure I have made people angry, happy, sad and frustrated. Unfortunately, I have also had victims unhappy with an overburdened criminal justice system that doesn’t always function flawlessly. I have even had people I arrested thank me and sometimes threaten or assault me.”

Majewski went on to say:

“Only a coward of the lowest sort would abuse or neglect an animal. To that person . . .  Karma is one day coming your way. To the rest of the animal loving world I am offering a $1,000 reward to anyone who provides information that leads to criminal charges against this timid soul.”

Here’s a message for Siren’s craven killer: We fervently hope you will soon be brought to earthly justice, you miserable scum. But whatever happens, we also agree with Detective Majewski: There is a special place in hell for those who mistreat animals.

May God bless Jeff Majewski and his fallen comrade. Our hearts go out to you both.