The Killer's Shadow - The Latest Book is Now Available! Click to Purchase
All in the Family The Science of Evil 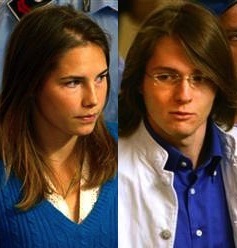 The Italian supreme Court of Cassation has just released the written explanation for its March decision to overturn the appeals court decision that itself overturned the convictions of American student Amanda Knox and her Italian student boyfriend Raffaele Sollecito, for the murder of Amanda’s English flatmate Meredith Kercher.

Once you examine all of the facts as we have, this is not a difficult case to solve. As far as we are concerned, the biggest remaining mystery is why the Italian judicial system just doesn’t let it go. Is it possible that the story of this pretty American girl whom the Italian media dubbed “Angel Face” is just too sordidly good not to hold onto? Or is it more likely that, having allowed prosecutor and Public Minister Giuliano Mignini to make an absolute mockery of truth and justice in claiming Amanda and Raffaele killed Meredith in a drug-fueled, Satan-inspired sexual frenzy, and having kept Amanda and Raffaele in prison for four years, the high court just wants to save face for what is plainly a horrid miscarriage of justice?

We have thoroughly examined the facts, evidence and behavioral indicators of this case in our recent book Law & Disorder, and it is not our intention here to recapitulate everything. Suffice it to say that there is no evidence – repeat, NO EVIDENCE – to indicate that Amanda and Raffaele were even present at the crime scene, much less participants in the murder. All evidence – every single bit of it – proves that Rudy Guede, who was also convicted of the crime – was solely responsible. But given the reality that many uninformed or gullible people will now take the Court of Cassation decree at face value, certain points must be addressed.

In its 74-page document, the high court claims the appeals decision “openly collides with objective facts of the case.”

For the court even to speak of “objective facts” when the prosecution has so twisted and obscured them is an exercise in rhetorical excess in and of itself. Come on, your honors, there are no facts tying these two to the murder! The entire verdict is based on could-haves, might-haves and it’s-possible-thats, but no evidence. The satanic ritual scenario came straight out of Mignini’s fevered imagination, and it wasn’t even original. As our colleagues Douglas Preston and Mario Spezi have impressively documented, Mignini first came up with this motive in the “Monster of Florence” case. It didn’t work there, either.

The high court said the appeals court had not taken into account evidence that Guede had not acted alone.

Again, what evidence? Rudy’s DNA is all over the crime scene in Meredith’s bedroom and Amanda and Raffaele’s is absent. Mignini claimed the other two had used bleach to erase all of theirs, which is physically impossible, yet the jury bought it. By the way, DNA is invisible to the naked eye, so it must have been particularly skillful of Amanda and Raffaele, a girl and a boy with zero criminal experience or sophistication, to perform this impossible feat without erasing any of the incriminating evidence against Rudy.

Moreover, for any well-trained and experienced homicide investigator or an FBI profiler, determining whether a crime scene represents one or multiple offenders is one of the most basic skills. Few scenes are ambiguous on this point, and this was not one of those.

Then the high court claims the appeals court didn’t give sufficient weight to Amanda’s so-called “confession” – that is, the statement she made after the police had browbeat and hammered at the confused, terrified, grief-stricken and utterly exhausted Amanda for so many hours in a tag-team interrogation that she literally could not separate dream state from reality and finally agreed to whatever they led her to.

As we have often stated – and proved through numerous examples – it is not difficult to obtain a false confession. Getting a true confession is a more formidable challenge. There is absolutely no doubt that in Amanda’s state at the time, if the police interrogators had suggested to her that she and Raffaele were in league with alien invaders who wanted to know what human sex and murder were all about, she would have gone along with that scenario.

Our friend, former FBI Special Agent Steve Moore, interrogated suspected terrorists after 9/11. He commented that, “If any FBI agents who reported to me had conducted the interview [with Amanda], I would have had them prosecuted.”

The written opinion goes on to fault the appeals court for not acknowledging Amanda’s false implication of the bar owner for whom she worked part-time, Patrick Lumumba, in her forced dream-like scenario in which she was told to “imagine” that she was actually in the house at the time of the murder.

This is perhaps the most illogical comment of all from the Court of Cassation. If she really was at the scene, why would she purposely protect someone she knew was guilty and implicate a friend whom she knew was innocent? She wouldn’t have. So why did she name Patrick rather than Rudy? Because the police had already mentioned Patrick to her and knew the connection between the two of them and they hadn’t even heard Rudy’s name at the time.

Rudy had committed other breaking-and-entering crimes and often used a knife. Amanda and Raffaele had no history of any sort of violence or sexual perversion.

Rudy had a clear-cut motive. Amanda and Raffaele did not.

We could go on and on like this, but there is no percentage in even dignifying an opinion that is so devoid of respect for facts and evidence as to be shameful. What part of this do they not understand?

The facts and evidence in this case are abundantly clear to any legitimate homicide investigator: Amanda Knox and Raffaele Sollecito are innocent of the murder of Meredith Kercher. Rudy Guede is guilty. End of story.

And the longer the Italian authorities refuse to accept that, the more they will embarrass themselves and shame the standards of truth they claim to honor.