The Killer's Shadow - The Latest Book is Now Available! Click to Purchase
Re-victimization in Massachusetts Justice in Montana 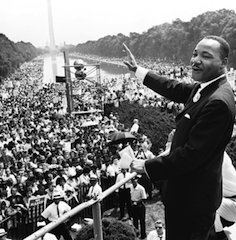 On this 50th anniversary of the March on Washington, we will be hearing many quotations from Dr. Martin Luther King Jr.’s immortal “I Have a Dream Speech,” and much about what happened that day in and around the Lincoln Memorial. That, of course, is right and proper. But more than that, it is incumbent upon those of us who were alive then to remind those who weren’t what it was all about and why it was even necessary. Because that day was about more than just soaring and inspirational rhetoric.

On that August 28th date, just eight years before, 14-year-old Emmett Till was abducted from his relatives’ house where he was visiting in Money, Mississippi and horribly tortured and killed by two men for allegedly having whistled at the wife of one of them.

I was young at the time of the 1963 march, but none of us alive then could be ignorant of what was happening in the bloody American South. Those images are forever seared in our memories.

Two and a half months before the march – on June 12, 1963 – 37-year-old World War II veteran and civil rights activist Medgar Evers was gunned down as he pulled into his own driveway in Jackson, Mississippi, by Byron De La Beckwith, a member of the White Citizens’ Council.

Just 18 days after Dr. King’s speech, Addie May Collins, Denise McNair, Carole Robertson and Cynthia Wesley – four African American girls ranging in age from 11 to 14 – were killed when four proud members of the United Klans of America planted a box of dynamite in the basement of the 16th Street Baptist Church in Birmingham, Alabama. It was set with a timed fuse so that it would go off during a service. The sermon scheduled for that day was entitled, “The Love That Forgives.”

The following “Freedom Summer” – late on the night of June 21, 1964 – one black and two white civil rights and voter registration activists – James Chaney, Andrew Goodman and Michael Schwerner – were arrested by police officers in Neshoba County, Mississippi, and turned over to a lynch mob made up of members of the Mississippi White Knights of the Ku Klux Klan. They were shot at close range and their bodies buried.

A year and a half after the King speech – on March 7, 1965 – peaceful protesters in the Selma to Montgomery march for voting rights were violently attacked by state troopers as they reached the Edmund Pettus Bridge over the Alabama River.

Later that month, Viola Liuzzo, a white civil rights worker from Michigan, was shot and killed by four Ku Klux Klan members while driving her car to pick up civil rights marchers in Lowndes County, Alabama.

We could go on and on with incidents like this. And it was not just overt violence perpetrated by thugs purporting to be upstanding citizens and community leaders. Following the 1954 Supreme Court decision in Brown, employing a strategy proudly proclaimed as “massive resistance,” a number of counties in Virginia closed their public schools rather than integrate. In 196, Mississippi Governor Ross Barnett ordered the arrest of “Freedom Riders” and the next year went up against the Justice Department in trying to prevent James Meredith from enrolling in the University of Mississippi. On June 11, 1963, Governor George Wallace stood on the steps of Foster Auditorium at the University of Alabama to prevent two black students from enrolling.

Contrast these shameful “leaders” with the giants who organized the March on Washington: Dr. Martin Luther King and Bayard Rustin of the Southern Christian Leadership Conference, A. Philip Randolph of the Brotherhood of Sleeping Car Porters, Roy Wilkins of the National Association for the Advancement of Colored People, White Young of the National Urban League, James Farmer of the Congress of Racial Equality, and John Lewis of the Student Nonviolent Coordinating Committee, now a United States Congressman from Georgia. Justice is sacred, and their names are sacred in the annals of justice.

In this day and age, when we are so sensitive to any whiff of terrorism, it is important to remember that terrorism and officially sanctioned intimidation against African Americans and anyone else who tried to help them was accepted and tolerated in this nation for more than a century. Many men and women lived and died to get us even to the imperfect place where we are today. And as recent cases have shown us, much work remains to be done on both sides.

But those of us who remember have an obligation to make sure the heroes and martyrs of the struggle for equality are never forgotten.

3 Responses to Fifty Years Ago