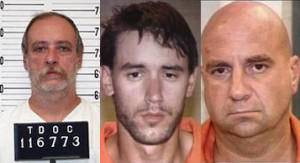 On the morning of June 28, 2007, we awoke to learn that a man had died in Tennessee  overnight. And, unlike our normal reactions when we learn of any death, we rejoiced.

The man’s name was Sedley Alley. He died by lethal injection at the Riverbend Maximum Security in west Nashville for the 1985 murder of 19-year-old U.S. Marine Lance Corporal Suzanne Marie Collins. Before he took his leave, Alley had been on death row longer than Suzanne was alive on earth.

Now, with last week’s four-to-three decision by the Supreme Court of the State of Connecticut, two men will be spared a final resolution similar to Mr. Alley’s. And, unlike our normal reactions when we learn of any life saved, we grieved.

On the evening of July 12, 1985, while jogging on the Memphis Naval Air Station base in Millington, Tennessee, beautiful, blonde, 118-pound Suzanne Collins was attacked, abducted and hideously assaulted with a tree limb jammed with such force into her vagina that it ruptured internal organs up to her lungs. Sedley Alley, whose wife was a civilian employee on the base, was quickly picked up and charged with the murder. He had been angry that night and had to take it out on someone. Alley admitted the assault and murder, then changed his story three times. But there was never an ounce of reasonable doubt as to his guilt, which a jury confirmed at the conclusion of his trial.

In our recent book Law & Disorder, we recount how Alley’s ex-wife confirmed his guilt to us and admitted the burden she has been living under since that horrible night: that Suzanne died in her place.

We rejoiced at the execution because we had become very close with Suzanne’s parents Jack and Trudy Collins and her brother Steve. Since Suzanne’s death, their lives had been dedicated to achieving justice for her, and that meant her murderer should face the sentence the jury handed down. Though there is never any closure, finally they felt a measure of peace and balance that, to the extent possible, the justice system had done right by them.

The Connecticut Supreme Court ruled last week that in the wake of the abolition of capital punishment in the state, those remaining on death row from previous convictions, would no longer face execution. “This state’s death penalty,” the majority declared, “no longer comports with contemporary standards of decency.”

Two of the 11 individuals on death row are Joshua Komisarjevski, 35, and Steven Hayes, 52, who broke into the house of Dr. William A. Petit, Jr., his wife Jennifer Hawke-Petit, and their teenage daughter Hayley and preteen daughter Michaela in the town of Cheshire, near New Haven. Upon encountering Dr. Petit, they tied him up and tried to bludgeon him to death. Sometime later, unbeknownst to them, he managed to free himself and escape.

After many hours of horror, Komisarjevski and Hayes were apprehended while fleeing the scene when they crashed into two police cruisers. Police had surrounded the house and were preparing for a rescue. Before they could – or did – react, the offenders had raped and assaulted Jennifer, tied the two girls to their beds and set the house on fire in an attempt to destroy evidence. Prior to this, they had forced Jennifer to go to her bank and withdraw money for them. Jennifer was able to whisper a message to the teller and the bank manager immediately alerted the police.

There was absolutely no question as to the guilt of these two monsters. Their crime, like Sedley Alley’s, was wanton and cruel beyond the normal imagination to conceive. Dr. Petit feels betrayed by the state’s renunciation of the jury’s verdict. And the state Supreme Court has the gaul to even mention comporting with contemporary standards of decency.

Sparing these lives and using these words to support the decision, we assume, is supposed to demonstrate the contrast between immoral criminals and a moral society. But in our view, it is a false morality. Inhuman is too mild a word to describe what they did, and therefore no human concepts like decency apply.

In a case like this, we prefer concepts like retribution, vengeance and genuine morality. Because we believe the most moral action a society can take is to purge itself of individuals who, by their deeds, have forfeited their rights to human consideration.

We shouldn’t have to share our world with the likes of Mr. Alley, Mr. Komisarjevski and Mr. Hayes. And neither should Jack and Trudy Collins and Dr. Petit.

And that is why we grieve over these two lives spared.

7 Responses to Grieving For Lives Spared