The Killer Across The Table - The Latest Book is Now Available! Click to Purchase
And a Little Child Shall Lead Them Suspending a Sentence . . . and Logic

It Can Happen Anywhere 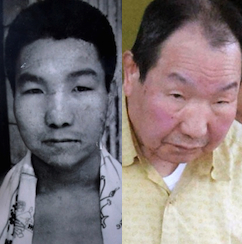 Iwao Hakamada, then and now

Since the publication of Law & Disorder, we have devoted a good deal of time and energy to pointing out flaws in our judicial system that allow – and sometimes encourage – the conviction of innocent men and women. We have focussed on numerous cases in the United States, such as West Memphis Three in Arkansas, and have paid particularly attention to the shameful conviction and re-conviction of Amanda Knox and Raffaele Sollecito in Italy.

Yesterday in Japan, Iwao Hakamada, 78, was released from the Tokyo Detention Centre by order of the Shizuoka District Court, and granted a retrial. Until then, he held the world’s record as the longest-serving inmate on death row – 48 years.

So it’s not just us.

In 1966, 30 year-old Mr. Hakamada had retired as a successful featherweight boxer and had taken a job in a food processing plant in Shimizu, on Japan’s southern coast. On June 30, the plant manager, his wife and two children were found stabbed to death in their home and 200,000 yen (about $2,000) had been stolen. As part of the crime, the house was burned to the ground.

In August of that year, Hakamada was arrested and charged with murder, robbery and arson. He confessed to police, then later recanted his confession. On September 11, 1968, a three-judge panel sentenced him to death by hanging. He spent his entire time in prison never knowing if, or when, that sentence would be carried out.

And if we dip just below the surface, the case has the same troubling elements we’ve seen in so many other instances, including West Memphis Three and Knox-Sollecito. Japan, one of our staunchest and most consistent allies since the end of World War II, like us, retains the death penalty. And like us, some of their investigative techniques, can use some greater transparency.

Specifically, police interrogations are held behind closed doors. Hakamada’s lasted 23 days during which he said he was kicked, clubbed and otherwise physically and mentally abused, and denied food and water and bathroom breaks for long periods. Once the police had his confession and the interrogation was over, he immediately recanted it. Key pieces of evidence were articles of clothing prosecutors alleged the killer wore the night of the murders and contained his blood. Subsequent testing showed that the DNA traces were not from Hakamada and the trousers were significantly too small for him.

When Hakamada went into prison, he was a strong and robust young man. When he left this week, he was an old and frail one. In an effort to solve the taking of four lives, the Japanese criminal justice system has taken another one, at least the most healthy and productive part of one.

This “crime” is almost as egregious as the one we now suspect was perpetrated by the city of Chicago and state of Illinois against William Heirens, also detailed in Law & Disorder. We now strongly suspect he was erroneously convicted – on a false confession, no less – for three murders in post-World War II Chicago, and was America’s longest-serving inmate until his death in 2012. We may never know for sure whether this was the massive miscarriage of justice we think it was, but that, in itself, is a crime.

Most men and women in law enforcement and criminal justice are honest and hardworking. They know there are no shortcuts to making an honest and solid case.

But as the Hakamada case and so many others prove, it’s the small minority we have to watch out for and guard against, wherever in the world they happen to be.

9 Responses to It Can Happen Anywhere