Justice From The Twilight Zone 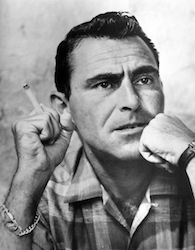 If there was one subject that preoccupied Rod Serling, the late creator of The Twilight Zone, it was justice – legal justice, social justice, personal justice, cosmic justice. Rod was my friend, mentor and role model during the last ten years of his all too short life and much of what I became as a writer and as a person is due to his influence. For my entire professional career, I have had a copy of the photo at left, signed to me, hanging on my office wall for inspiration.

Now, all of Serling’s published work is being reissued in a uniform edition in trade paperback and digital form, as a joint venture between Rod Serling Books and CreateSpace Publishing. I am honored that I was asked to write the introduction to one of those books, The Season to be Wary, and here’s why it is an important part of the great man’s oeuvre.

The Season to be Wary, originally published in 1967, consists of three novellas, and represented Serling’s first foray into long-form fiction. I strongly believe that had he lived, he would have become an important novelist. Of the three novellas, two were transformed into pilots for his last television series, Night Gallery. One of the pilots, Eyes, was directed by a promising newcomer who had just showed up on the Universal Studios lot, by the name of Steven Spielberg.

Like episodes of The Twilight Zone, these three stories are taut, character-driven narratives with a deep ethical point of view and a sense of justice that was realized with a strong element of fantasy or sci fi. All three are cautionary tales on the moral hazard of living life without empathy for one’s fellow man and woman. And like the Zone, they hold up just as well 45 years later as they did the day they were written.

“The Escape Route” deals with a subject that obsessed Serling throughout his adult life: the Holocaust and the enormity of evil that seemed to subvert all notions of justice, or even punishment and retribution. It concerns one. It concerns one former Gruppenfuehrer Joseph Strobe, late of Dachau, living a miserable little existence in Buenos Aires when he gets word that Adolf Eichmann has been captured by the Israelis and brought back to Jerusalem to stand trial before the world. If they got Eichmann, is anyone safe?

In this story, though, there are no concentration camp scenes and only summary evocations of torture and mass murder. The piece is, rather, a psychological study of a guilty and unrepentant man on the run. And for crimes so horrific that mere death will not balance them, Serling turns to ingenious fantasy to render supernatural justice.

If there was any subject that brought forth more passion from Rod Serling than the moral implications of the Holocaust, it was the civil rights struggle and the basic quest for a society that treated all of its members equally.“Color Scheme,” the story of what happens when a rabble rousing preacher and hate-monger by the name of King Connacher comes to a small and nasty Mississippi burg on the eve of a civil rights march, is another tale of supernatural justice. More than anything else, this is a story of transformation. There is the mystical human transformation on which the action and character development hinge. But even more important, he is writing about an entire civilization and way of life that, from one side, at least, was going through a wrenching and very much unwanted transformation.

“Eyes” has no larger social context on the order of “Escape Route” and “Color Scheme.” Instead, it hearkens back to a familiar theme from Twilight Zone and Serling’s original teleplays – specifically, the venality, cravenness and moral vacuum in the souls of those who live through the manipulation and exploitation of others.

Just as the generation now coming of age may find it difficult to appreciate the impact of Jackie Robinson and Larry Doby not only on Major League Baseball but on all of American society, so they may not appreciate the impact of Rod Serling, not only on television in the 1950’s and 1960’s, but on that same society. The reason in both examples is that what these men pioneered, we now take for granted as “normal.” Through his live television dramas and then through The Twilight Zone, Serling focused a moral prism on the values and assumptions of American society. In the process, particularly through the Zone, he taught my generation not to take anything for granted, to question everything, and to try to change what is wrong. And even when there was no practical, “real-life” justice available, he showed us spiritual, or supernatural, justice was still a possibility that, if nothing else, gave every human action a moral dimension.

All of this is evident in  The Season to be Wary. It is a book that shows a writer who had a profound impact on the American cultural scene at his own transition point. But as always, what he is interested in making us think about is justice. I highly recommend this book, available on Amazon.com:

More than thirty years after his death, Rod Serling may have the same effect on you that he continues to have on me.

9 Responses to Justice From The Twilight Zone