The Killer's Shadow - The Latest Book is Now Available! Click to Purchase
A Matter of Expectation The Insanity Will Continue 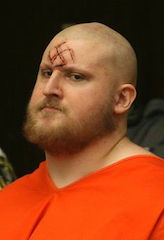 Keith Luke, a 28 year-old neo-Nazi serving two consecutive life terms for murder and rape, was pronounced dead last week at the University of Massachusetts Memorial Medical Center in Worcester after being found unresponsive in his cell at the Souza-Baranowski Correctional Center in Shirley, Massachusetts.

Few tears were shed over the apparent suicide. But a cursory review of Luke’s short and miserable life confirms just about everything most of us already knew instinctively about this despicable excuse for a man and all of the others of his ilk.

In discussing white supremacists and neo-Nazis, we’ve often made the point that in all cases, these guys are driven by a deep-seated sense of inadequacy and resentment, generally accompanied by a high level of stupidity. The only way they can dispel this inadequacy is by gathering together for strength and focussing on another group or groups that they can either feel superior to or blame for unfairly robbing them of their expected rights and opportunities. Note that you never come across an intellectual racist or anti-Semite. These guys always come from the bottom of the barrel.

Quote from Mr. Luke to police: “I’m not a coward. I’m not selfish. I’m not worshipping my vices. I’m living my life for something bigger. That’s the white race.”

On January 21, 2009, the uncowardly, unselfish resident of Brockton forced his way into an apartment on Clinton Street in that city, handcuffed the 22 year-old woman inside and raped and sodomized her at gunpoint. “I knocked on the door and she opened it. I put the gun to her face and I walked in there,” he calmly explained to detectives.

He had two competing – though not conflicting – motives for the act: He wanted to kill non-whites, and after being turned down by women “100,000 (expletive) times,” he did not want to die a virgin.

He admitted that his plan turned “sloppy” when the woman’s 20 year-old sister, Selma Goncalves, unexpectedly returned home while he was committing his sexual assault. Ms. Goncalves ran to the door, at which point Luke shot her three times. He then shot the woman he had just raped, then ran to his van outside.

Goncalves had managed to stagger outside, where she was being assisted by a man who ran up to her. So he shot him, too. The rape victim survived. Ms. Goncalves died at the scene.

As he was driving away in the van, music on full blast, he spotted Arlindo Goncalves (no relation), a 72 year-old homeless man pushing a carriage full of his belongings. “I got out the gun, I shot him in the head and I shot him in the back,” Luke related.

When police caught up with him, he shot at them, too, but as they returned fire through his windshield he lost control of the van and “had a giant collision.”

While he had no remorse for his Hispanic victims, he apologized for firing at the police officers. “It was stupid to shoot at them. They were whites.”

Had he not been stopped by the police, the visionary Mr. Luke had planned to kill bingo players at a nearby synagogue.

While in prison, he used a staple to artfully carve a swastika into his forehead.

Reportedly, this sorry loser had attempted suicide twice before in prison. So at least there is one thing we can be thankful for in Keith Luke’s uncowardly, unselfish and (except for the brutal rape) unlaid life. And it is that, on his third try, he was finally successful at something and got it right.

As Brockton City Councilman Moises Rodrigues put it, “I think the world is a better place today without him.”

Amen to that, Brother!