The Killer's Shadow - The Latest Book is Now Available! Click to Purchase
The Thing Speaks For Itself It’s Always Someone Else’s Fault 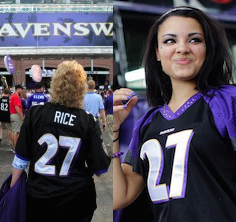 The setting where we’re used to hearing sentiments such as these is a courtroom, during hearings on the sentencing phase of trials for offenders who have been convicted of violent crimes, from basic assault and battery all the way up to murder.

You shouldn’t judge a man just by this one action, the argument goes. There is so much more to him.

The basic flaw in the argument is that you can’t take away “those two minutes,” or however long it took the offender to seriously hurt or kill his victim. Like it or not, we are all defined not by our everyday actions, but by the best and worst moments of our lives. If Mother Teresa had murdered someone, despite all her good works, she would have been immediately transformed from saint to killer; that’s just how life works, and in a moral society, it can be no other.

So we’re sorry, Mr. Smith. You may still consider Mr. Rice a “great guy,” but he is far from a “model citizen.” Model citizens do not beat their fiancés unconscious in public elevators and then drag them down the hall to get them out of the way. Is this the example you want to set for the youth of America?

Here’s another female Baltimore fan: “I absolutely 100% support him. I do. It had nothing to do with his job. He should not have lost his job.”

Well, maybe not. But here’s another thought: If he had received a sentence that was appropriate to his actions, he would have lost his job just the same, because it’s difficult to play professional football when you’re in jail.

Just as Mr. Smith wanted to take away those two minutes, if we take away the observation that “he’s an awesome football player,” does the equation remain the same?

In handing down a mere two-game suspension after reportedly hearing directly from Ray Rice what he did in the elevator to Janay Palmer, did National Football League Commissioner Roger Goodell consider how he would have felt had it been one of his twin daughters in there, or did he just consider that Rice is an awesome football player and therefore beneficial to the product he is handsomely paid to protect?

Unfortunately, there is a direct connection to the old sick punchline, “Other than that, Mrs. Lincoln, how did you like the theater?” But that is just the point. That night’s entertainment, obviously, became irrelevant after President Lincoln’s assassination.

And the same is true about a man’s character even if he is particularly effective in Sunday’s “big game.”

Because you can’t take away those two minutes.