The Killer's Shadow - The Latest Book is Now Available! Click to Purchase
An Idea Whose Time Has Come The Thing Speaks For Itself 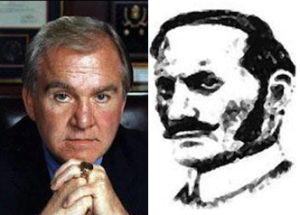 We have neither personally examined the shawl nor reviewed the work of Dr. Jari Louhelainen, the molecular biologist and DNA expert at Liverpool John Moores University, who conducted the exacting tests. Dr. Louhelainen has stated that he was able to match up arterial blood residue on the shawl to a descendant of Eddowes and semen deposits to a descendant of Kosminski’s sister. The critical point is that the test connected the semen deposit to having come from someone of Eastern European Jewish origin. Given what we know so far, we are gratified by the finding, since John’s conclusion was based strictly on profiling.

But it may not be that simple.

For our book The Cases That Haunt Us, we thoroughly reviewed and investigated the Ripper murders and evaluated all of the reasonable or semi-reasonable suspects. I visited all of the crime scenes and discussed the cases with several homicide detectives from Scotland Yard, including John Ross who, after his distinguished investigative career, became the curator of Scotland Yard’s celebrated “Black Museum,” at which I spent considerable time.

Working with Mr. Ross, I became convinced that while no suspect was ever officially identified or apprehended, the Metropolitan Police knew the Ripper’s identity. I won’t go into all the reasoning here, but it is detailed in The Cases That Haunt Us, as well as the logic behind Kosminski as a suspect.

I also got in touch with Martin Fido, the British literary scholar who is one of the world’s leading experts on Jack the Ripper and the author of the authoritative Encyclopedia of Scotland Yard. I was gratified to learn that Mr. Fido, who is now a professor at Boston University, agreed with our conclusions that the police knew the Ripper’s identity and agreed with John’s profile. But Fido had done meticulous research of his own, including the records of every prison and insane asylum of the time and had come to a startling and compelling discovery: that the individual several police officials identified as Aaron Kosminski was actually another Polish Jewish immigrant, also evidently insane, named David Cohen. To go further, that may not even have been his real name; it may have been a “John Doe” the police used to refer to unidentified Jews. At any rate, the profile remained exactly the same.

Confusing? To be sure. But it has been a murky and confusing case from the beginning.

In the years since the publication of The Cases That Haunt Us, we stuck by our guns amidst all of the “new” and competing theories, including Patricia Cornwell’s Portrait of a Killer: Jack the Ripper – Case Closed, which posited what we considered the preposterous notion that Jack was actually Victorian painter Walter Richard Sickert.

It’s too soon to tell how Dr. Louhelainen’s work will affect the insatiable field of “Ripperology,” but it certainly adds a new dimension. And to echo  what we wrote in The Cases That Haunt Us more than a decade ago, it may be impossible to be certain of the true identity after all these years, but the behavioral evidence as to the type of individual he was is plentiful and compelling. Therefore, we are prepared to declare that Jack the Ripper was either the man known to the police as Aaron Kosminski/David Cohen, or someone very much like him.

11 Responses to So Was John Right After All?