The Killer's Shadow - The Latest Book is Now Available! Click to Purchase
The Passion of Michael Morton The Wedding Gift of Murder 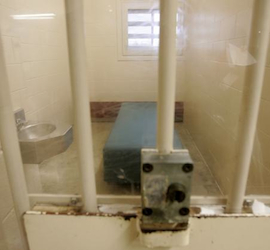 A report released yesterday by the Ohio State Highway Patrol on the death in prison of Ariel Castro tells us that the demise of the longtime proprietor of the Cleveland House of Horrors was a simple suicide. Despite the fact that he was discovered in his cell hanging from a bed sheet with his prison pants down around his ankles and no underwear, both autoerotic asphyxiation (the originally suspected cause of death) and retribution killing by another inmate or prison guard, have both been ruled out.

It was explained that the previously portly Castro had lost weight since his incarceration at the Orient, Ohio  Correctional Reception Center, and had trouble keeping his trousers up. The revelation that he wrote a note that day quoting Biblical scripture is considered confirmation of his suicidal intentions.

So what does this all mean in the context of this sorry life?

A lot or almost nothing, depending on your interpretation.

Assuming the death was a suicide and the note genuine – we have no real reason to believe otherwise – the entire act was consistent with the personality of this monster. Never taking responsibility for imprisoning, impregnating and torturing innocent women over a decade of terror, Castro claimed to the end that it was all just one big happy family and if anything, he was merely sick and so not responsible. In other words, “I didn’t do anything wrong, I just gave these women a nice warm home. And even if I did do wrong, which I didn’t, there was a medical reason.”

His note declares that those who confess with their hearts will be saved. He doesn’t even get that he has never done that.

He then goes on to sort of quote Romans 3:22-24 that, “all are sinners, we all fall short of the glory of God. Christ is my saviour and yours!!”, though he doesn’t get it exactly right and as far as I can tell, the Bible doesn’t use double exclamation points.

After what he did and did not own up to, Castro’s arrogance in quoting scripture at all, placing himself in the same state of moral culpability as “ordinary people” and proclaiming his own hold on redemption is breathtaking. It’s all about him. With sexual predators like this, it’s always all about them.

Suicide also confirms that Castro was a coward. Yes, taking one’s own life does require some degree of courage, at least for a few moments. But not nearly as much courage as the alternative. He was not prepared to spend long years in a hostile environment not of his own making, where someone else was in control. He was used to having it the other way around and his ego would not allow this helplessness. He had to be calling the shots, and when he was put in an open-ended, extremely mild-in-comparison version of what he himself had established, he couldn’t take it.

If the official report is wrong – and again, we have no reason to believe it is – then the end effect is the same. If it was an accidental death due to sexual stimulation, well then, he died the way he lived, and no man is entitled to ask for more than that.

And if he was murdered? Let us not be cavalier, but let us also quote scripture, accurately this time. Galatians 6 states: “Be not deceived; God is not mocked: for whatsoever a man soweth, that shall he also reap.”

Whatever the means of your leave-taking, Mr. Castro: Reap well, and rot in hell.

One Response to Sowing and Reaping