The Killer's Shadow - The Latest Book is Now Available! Click to Purchase
The Only Reasonable Sentence Prosecutorial Overreach?

Speaking Out For Stephanie 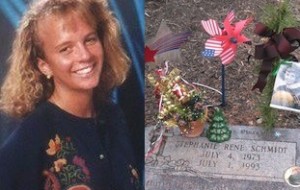 On this July 4, 2013, as we collectively celebrate the blessings of liberty and safety from tyranny, Stephanie Rene Schmidt of Leawood, Kansas, should have been celebrating her 40th birthday, surrounded by her adoring family.

“For the first three or four years of Stephanie’s life, I let her believe all the fireworks were for her,” her father Gene recalled.

I say, “should have been celebrating” because 20 years and two days ago, on July 2, 1993, the beautiful blonde student at Pittsburg (that’s right, no “h” at the end) State University was assaulted and murdered by a man named Donald Ray Gideon, a co-worker at the restaurant where Stephanie was earning her way through college.

The story of Stephanie’s death and her parents’ and sister’s struggle to make something meaningful come out of it is a saga of almost unbelievable suffering, dedication and heroism.

Donald Gideon, it turned out, was a paroled violent rapist. But neither his co-workers at Hamilton’s restaurant, nor co-owner Tom Hamilton himself, who was thrilled to have such a happy, outgoing and hardworking young woman as Stephanie working for him, knew this. Gideon’s parole officer had decided not to tell them. So when Stephanie accepted a ride from him following an early birthday celebration at a Pittsburg bar, she had no way of knowing that this decision would prove fatal.

After several days, with Stephanie and Gideon both missing, police focussed on him. When the case was featured on John Walsh’s America’s Most Wanted, Gideon called the Volusia County, Florida, Sheriff’s Office from a phone booth in Ormond Beach and turned himself in. Once back in Kansas, he began talking to detectives, and on July 27, police found Stephanie’s badly decomposed body in a field surrounded by woods about ten miles southwest of Pittsburg.

Her parents, Gene and Peggy, and her younger sister Jeni, were devastated. And truth be told, they have never been the same since, though Jeni is now happily married to a wonderful man, children’s singer-songwriter-performer Jim Cosgrove, and Peggy and Gene dote on their two gorgeous blonde granddaughters, Lyda and Willa. Jeni finally feels ready to write her own book about the emotional journey of the past twenty years, which I know will be both an eye-opening memoir of pain, courage, love and perseverance, and an invaluable guide to facing loss and the long, slow process of regeneration.

But this is not just about grief. It is about what the Schmidts did with their grief that made them such heroes. Almost overnight, they transformed from proprietors of their own successful advertising and marketing firm into public interest advocates, sacrificing their time and comfortable income and dedicating their sizable talents to a greater and enormously important cause.

Soon after their daughter’s death, the Schmidts created the “Speak out for Stephanie” program and the Stephanie Schmidt Foundation. Their purpose was two-fold: The first was to try to prevent this kind of horror from destroying anyone else, through education, outreach, publication and public events. As Gene says, “Silence kills,” and the Schmidts refused to be silent, warning both parents and young people about the dangers they faced in even casual social situations and how to become more aware and protect themselves and their friends and loved ones.

Their second and simultaneous focus was on law and public policy. Why did no one know that Don Gideon was a violent rapist? Wasn’t it more important to protect his potential victims than to make sure he kept his job as a restaurant dishwasher? And why was a man like this released in the first place? The Kansas Department of Corrections had no reasonable answer.

Donald Gideon was found guilty and sentenced to life imprisonment, with a mandatory “hard 40.” By the grace of God and man, we hope he will spend the rest of his life behind bars. But the Schmidts didn’t stop there. They sued the Department of Corrections and lobbied for a new law that would require sexual predators to undergo a psychiatric examination for dangerousness before they could be released into society, even if they had served their sentences. If they were deemed still dangerous, they could be committed civilly.

With the help and collaboration of then-Kansas State Attorney General Carla Stovall, they took their fight to the Kansas legislature, through the state court system, and ultimately up to the United States Supreme Court.

When the highest court in the land affirmed Kansas v. Hendricks  in 1997, Gene and Peggy Schmidt had won a victory of incalculable significance – incalculable because no one can say how many young women’s lives were saved as a result.

John Douglas and I have recounted their compelling and inspiring story in our book, Obsession.

My wife Carolyn and I were with the Schmidts and Carla Stovall and hundreds of others a few weeks later for the “Supreme Celebration” in the backyard of their home in Leawood. After Gene, Peggy and Jeni cut a huge cake, the attorney general presented them with a homespun angel doll, with curly blonde hair like Stephanie’s. The angel held a heart, on which was written, “Stephanie Smiled – June 23, 1997” – the date the Supreme Court decision was handed down.

We hope Stephanie is still smiling on all of those who have joined Gene, Peggy and Jeni in the good and never-ending fight for awareness, safety, common sense and justice.

5 Responses to Speaking Out For Stephanie