The Killer's Shadow - The Latest Book is Now Available! Click to Purchase
Mr. Lemon and Mr. Simmons Who Belongs in Prison, and For How Long?

The Mind – and Brain – of a Serial Killer 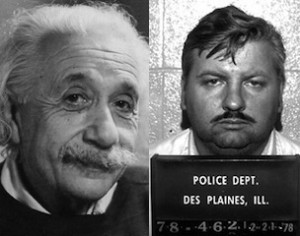 Albert Einstein & John Wayne Gacy
“What Made Them Tick?”

My first published novel, Einstein’s Brain, was based on fact. When the legendary physicist died in Princeton in 1955, his brain was removed by the Mercer County, New Jersey, pathologist. In the decades that followed, a number of neuroanatomists and other scientists studied the brain, hoping it would yield the secrets of Einstein’s amazing intelligence. The research revealed almost nothing.

When serial killer John Wayne Gacy was executed by lethal injection in 1994 at the Stateville Correctional Center in Crest Hill, Illinois, his brain was also removed for study, hoping it would yield the secrets of Gacy’s horrific propensity to kill. The research revealed almost nothing.

No surprise in either case.

My novelist imagination made up an alternate reality for the Einstein story. No such flight of fancy can alter the hideous facts of Gacy’s.

One of the principal researchers in Gacy’s case was Dr. Helen Morrison, a forensic psychiatrist in Chicago who has made an extensive study of serial killers and other violent predators. In addition to her work on Gacy’s postmortem brain, she estimates that she spent more than 600 hours interviewing Gacy in prison, delving into his motivation for raping and murdering at least 33 boys and young men, many of whom he buried in and around his home, all the while functioning as a “normal” businessman and civic leader.

Distressingly to Dr. Morrison, as well as to the rest of the forensic community, her interviews led to no discernible conclusion. “He didn’t hate his mother. He didn’t despise his father. He wasn’t on drugs. I mean there was no human motive whatsoever.”

The motive, as John Douglas and his colleagues have shown repeatedly, is that the sexual assaults and murders gave him a sense of manipulation, domination and control of another human being that was more thrilling, satisfying and ego-reinforcing than any other aspect of his life. It became his literal raison d’être. John – Douglas, not Gacy – confirmed the exact same thing when he studied and then interviewed Wichita’s BTK Strangler Dennis Rader. It was the same with Ted Bundy and all of the others.

Hoping to be able to ameliorate this kind of behavior, Dr. Morrison turned from the ethereal mind to the physical brain. Her theory  is that the scientific day will come when electrodes attached to the brain will be able to identify the actual source of criminal thoughts and modify them. “We could measure what we expect would be an abnormality,” she was quoted by CNN. “We can do in-depth genetic mapping, and try to figure what it is that leads to the actions.”

This is a highly laudable goal and one that is an evolution in attempts that have been made for over 100 years to discern an organic or physical connection between the brain and antisocial behavior. in the 1800’s there was phrenology, then eugenics in the early part of the 1900’s, then abnormal chromosome theory, then electroencephalography to detect specific brain lesions, and now this.

Frankly, I doubt any scientific technique is near fruition. It’s just too complicated an unknowable. The great brain researcher Eric Kandel of Columbia University, the only psychiatrist to win a Nobel Prize in Physiology or Medicine, began his career hoping to locate a physical situs in the brain for Freud’s concept of id, ego, and superego. He ended up settling for determining how memory is stored in sea slugs, the pioneering research that led to his Nobel. So you see how far away we are still.

Even if we got to the point Morrison foresees, how do we know we’re only modifying “bad” thoughts while leaving everything else alone? That’s a tough order. On a gross level, we’ve been able to modify behavior through brain manipulation for decades. The technique was called prefrontal lobotomy and the results were not pretty. I think we’re a long way from dealing with specific impulses or motivations.

In the meantime, we must content ourselves with what John Douglas has already shown us about serial predators: They do it because they want to, because it makes them feel good. Other people are only tools to satisfy them and their suffering is only meaningful in that it satisfies the one inflicting the pain.

And as far as I can see into the future, our current methods of dealing with them are both prudent and effective: hunt them down, catch them, try and convict them, and either execute them or put them away indefinitely.

Like Dr. Morrison, I am hopeful that some time in the distant future we might be able to prevent their hideous acts in the first place.  But I’m not holding my breath.

7 Responses to The Mind – and Brain – of a Serial Killer