The Killer's Shadow - The Latest Book is Now Available! Click to Purchase
In the Eyes of a Child When Responsibility Is Alien

The Mysteries of Why 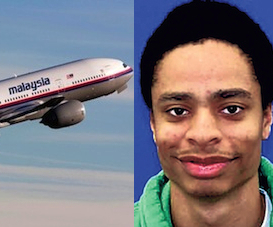 Two stories, both of them front page, juxtaposed in my mind this morning as I was reading the newspapers. A Washington Post headline announced, “Mall Shooter Obsessed with Columbine Attack, Police Say. ” The New York Times proclaimed, “Theories Grow Without Facts on Lost Flights.”

Both articles concerned subjects of key interest to this column and this website – violent crime and international security – yet would seem to have little to do with each other.

But in the most important sense, they most certainly do.

The story on Darion Marcus Aguilar, the 19-year-old who went on a shooting spree at The Mall in Columbia, Maryland on Saturday, January 25, that left two dead and one injured, gave us two pieces of information from the Howard County Police Department that appeared at first glance to explain the young man’s depraved actions.

One is that he was obsessed with the 1999 massacre at Columbine High School in Colorado, idolizing its perpetrators Eric Harris and Dylan Klebold to the point of dressing like them and using a similar weapon. He trolled the Internet for months for every scrap of information he could get on Columbine and other mass shootings.

The other is that he also spent considerable time surfing the Net for information about mental illness, from which he apparently knew that he suffered. He even joined a chat room of people contemplating suicide. Indications from his writing suggest that the internally warring instincts of self-loathing and hatred for the rest of mankind ultimately brought him to his violent end. Police reported that his casualty count would have been much higher had he just been able to spot more victims after he killed the first two.

But while revealing and giving us some specificity, these two fact patterns actually tell us almost nothing. We already knew that Mr. Aguilar was mentally ill. How could he do what he did and not be? Have we ever come across a mass murderer who wasn’t mentally ill? They may not all be insane by the legal definition (there is no medical definition) of the term, but no one in his right mind shoots up a school, shopping center or movie theater full of innocent people.

And we already knew that Aguilar must have looked to his mass murdering predecessors for identification, inspiration, strategy, and a means to make his inner demons manifest and meaningful; in other words, to have his suicide take on worldly significance.

The New York Times article was more straightforward: a recapitulation of what we don’t know about what happened to Malaysia Airlines Flight 370, which mysteriously disappeared last Saturday somewhere between the South China Sea and the Gulf of Thailand, or possibly the Straight of Malacca and the Indian Ocean, or maybe even somewhere else for all we presently know.

Pilots are speculating about some kind of sudden catastrophic equipment failure, possibly combined with a weather event or something from the natural world. Security experts are weighing the likelihood of a terrorist bomb, or even perhaps a hijacking that involved flying the plane to some unknown destination. Psychologists and behavioral “experts” are considering the possibility of mental instability on the part of one of the pilots. And the lunatic fringe, of course, is looking at alien abduction. But none of these constituencies is really sure about anything (except perhaps the alien abduction cohort).

And what ties these two stories together is that despite all of the scrutiny and science that law enforcement, security experts, the media and the public have directed at these two events, the simple fact of the matter is that we just don’t know what caused either to occur. We’re getting progressively better at understanding both our machines and ourselves, but we still don’t know nearly enough about either to keep bad things from happening.

We crave to know what actually took place in both cases – inside the fuselage of the airplane, and the brain of the shooter – so that we can try to prevent similar tragedies. But we also want to know for more subjective reasons: because we want to understand the human condition, the reasons people do the things they do, the reasons things happen the way they do. That is why the market for both true crime and crime fiction is so large – in books, on television, on movie screens and in the public news media. Crime represents the passion of the human condition writ large – at the extremes of behavior and circumstance.

Eventually we will know more about what happened to Flight 370, though we may not understand why it happened any better than we know what motivated Darion Aguilar. They may both remain mysteries we just can’t solve.

That is the maddening frustration.

And that is the tantalizing fascination.

13 Responses to The Mysteries of Why