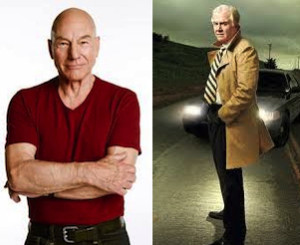 Writing about William Shakespeare’s 450th birthday yesterday put me in mind of the time  more than fifteen years ago when Patrick Stewart came to Washington to play Othello at the Shakespeare Theatre Company. I had met Patrick when I was filming my documentary Discovering Hamlet in England, and we soon became good friends. Patrick narrated that film, then I asked him to narrate the PBS-Nova program Mind of a Serial Killer, during which production I met John Douglas.

One of the most accomplished actors of his generation, the classically trained Stewart is a veteran of the Royal Shakespeare Company and has always been a rigorous explorer of character and motivation. Many people have said that the classical gravitas he lent to the character of Captain Jean Luc Picard on Star Trek: The Next Generation was one of the elements that made the series so successful. So when Othello rehearsals began, Patrick called me and asked what insights my study of criminal investigative analysis might offer as he developed his approach to the title role.

I suggested getting him together with John Douglas, and that’s where the Othello murder case began.

We related this tale in our book The Anatomy of Motive. There is a link under the Books heading on this website.

Previously, when white actors like Laurence Olivier played the black Othello, they used makeup. Patrick’s idea was the turn the tables for this production. He would be the only white actor, and the rest of the company would be African American.

Like his fictional forebear Sherlock Holmes, John became a world-renown expert on anything having to do with behavioral profiling and criminal investigation, and spent little time on other subjects, so he didn’t think he had even seen Othello before, much less read it. I thought this was an advantage, because he could then be objective.

Stewart and Patrice Johnson in “Othello”

In preparation for a lunch meeting at my house, I related the story of Othello, a Moor from Africa, a war hero and high-ranking military officer in medieval Venice, who falls in love with and marries Desdemona, the beautiful daughter of one of the city’s gentry. In the course of the play, he is led further and further by his ensign and supposedly close friend Iago, to believe that Desdemona is cheating on him with Iago’s superior officer, Michael Cassio. In the end, Othello, consumed with jealousy and grief, murders his wife in her bedroom.

John had recently worked with attorney Daniel Petrocelli on the civil case against O.J. Simpson, and he was struck by the parallels.

Once Patrick and I disabused him of the notion that Iago was after Othello’s gorgeous wife, John asked Patrick what he thought the motive was.

He’s brimming with rage that Othello has given to Cassio the promotion he thinks he deserves,” Patrick replied. “And so he sets out to destroy Othello by carrying out this plot to make him think his wife is being unfaithful.”

We talked about the stages Othello would have to go through in convincing himself that destroying his adored wife was his only course. Patrick soon homed in on the key behavioral question: How would Othello feel hearing these things about his wife?

John explained that from what we had told him about the character, he felt that rather than being outraged at this slur on his wife’s honor and integrity, Othello’s own insecurities and perceptions of inadequacy and unworthiness would be brought out by Iago’s charges. Of course his wife would be unfaithful to him, because deep down he worries that he’s not good enough for her. Her father was passionately against the marriage, and maybe he was right. Othello has compensated for being a foreigner and racial minority through his prowess as a warrior, whom everyone has to admire because they’re depending on him to protect them. But Iago, like many predatory personalities, is a pretty good profiler himself and understands how to get to his boss.

John described how Othello would be preparing for the killing in his own mind, getting emotionally comfortable with it. Before he can go through with it, he has to come to the classic formulation of “If I can’t have her, nobody else will.”

When Patrick described how he would straddle her on the bed and strangle her, John agreed that manual strangulation sounded realistic in this scenario. This was a domestic, personal-cause homicide, and this type of direct, face-to-face murder would tend to indicate that the offender and the victim knew each other well. John told Patrick that Othello would have to depersonalize her at this moment, that he should close his eyes and look away. The murder, in the parlance of profiling, would be a “soft kill.”

John said that someone in this situation would try to cover up the crime and get away with it, since he had justified it in his own mind, much as O.J. Simpson had. But if he were quickly discovered, as Othello is in the play, he would lose face with his troops, moral authority with Cassio, and now, through Iago, he’s betrayed the values he believes in the most.

For anyone fortunate enough to have seen the production, Patrick’s performance was moving and devastating. And when John and his family went to see it, he recognized a believable domestic killer up on the stage.

This wasn’t the first time John had given “murder instructions” to actors, having consulted on The Silence of the Lambs and other feature films. But it was the first time he had collaborated with Shakespeare. And in so doing, he proved once again that in addition to everything else, the Bard of Avon was the first – and perhaps the greatest – profiler of all time. 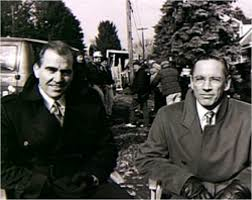 5 Responses to The Othello Murder Case