The Killer Across The Table - The Latest Book is Now Available! Click to Purchase
Zero Tolerance For Zero Tolerance And a Little Child Shall Lead Them

You’d Better Be Sure 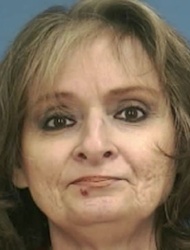 UPDATE: On Thursday, March 27, the Mississippi Supreme Court refused to set a date for Michelle Byrom’s execution as requested by the state Attorney General, stating, “Having duly considered the motion and Byrom’s response, the court finds that the Motion to Reset Execution Date is not well taken and should be denied.”

As our readers know, we support capital punishment. But we have two criteria that we believe should be met before a felon is subjected to the ultimate penalty: The murder is depraved, predatory and/or sadistic. And there is absolutely no reasonable doubt that the individual in question actually committed the crime, and in the manner described by the prosecution.

Michelle Byrom, 57, could be executed tomorrow by the state of Mississippi for a crime that meets neither of these tests.

Ms. Byrom was convicted of a 1999 conspiracy to have her husband, Edward Byrom, Sr., killed for his $150,000 insurance policy. Edward was fatally shot in the home they shared in Luka, Mississippi, while Michelle was in the hospital being treated for pneumonia. The couple’s son, Edward Byrom, Jr., testified against his mother and his former close friend Joey Gillis in the murder-for-hire scheme. Edward Jr. struck a deal for a lighter sentence, naming his mom as the mastermind of the plot. He and Gillis are now out of prison and Michelle faces lethal injection.

And here’s the heart of the issue: Edward Jr. has confessed three times to shooting his father – twice in letters to his mother in prison, and once to a court-appointed psychologist. No jury ever learned of any of these confessions. He said that he had killed is abusive father in a rage after a violent confrontation. He went to get a 9mm handgun that had belonged to his grandfather, entered his father’s bedroom, pulled the trigger and left.

Michelle’s attorneys tried to have the confession introduced in court, but the judge ruled that new evidence could not be introduced once the trial was underway. The court-appointed lawyers were trying their first capital case. Also, despite the prosecution theory of the case, Edward Jr. was the one with gunpowder residue on his hands, not Joey Gillis.

Once she was found guilty, on her attorneys’ recommendation, Michelle opted to waive jury sentencing and let the judge determine her punishment. That was where the death sentence came from.

Since all of this happened, Edward Jr. has gone back and forth on his story and Mississippi’s Supreme Court has rendered a 5-3 split vote against Michelle’s death sentence appeal on the basis of inadequate counsel.

We don’t know with certainty what happened in this case – whether Michelle did intend and plan her husband’s death or whether her son committed the crime on the spur of the moment.

But neither does anyone else.

This case is too ambiguous, with too many loose ends and contradictions, to take a chance on executing an innocent person.

Former Assistant District Attorney Arch Bullard, the lead prosecutor in the case, discounts stories that Michelle was an abused wife and is convinced she deserves her punishment. “Not only do I think that she was the mastermind or part of the conspiracy to have him killed, so did the jury, so have all the appellate courts in Mississippi, and throughout the federal system,” he told CNN, adding that he has “total faith in our judicial system.”

Maybe you’re right, Mr. Bullard. But would you bet your life on it, much less someone else’s?

3 Responses to You’d Better Be Sure