The Killer Across The Table - The Latest Book is Now Available! Click to Purchase
When Responsibility Is Alien You’d Better Be Sure 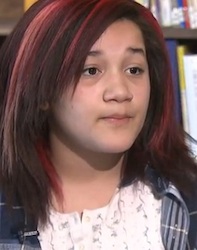 Remember Erin Cox, the honors student and star volleyball player from North Andover High School near Boston who was suspended for five games and demoted from team captain for responding to a friend’s request to be driven home from a party where alcohol was being consumed? Everyone else thought Erin deserved a medal for not letting a friend drive drunk. But the school system felt she needed to be punished for violating the zero tolerance policy of being present where alcohol was being served.

The week before last, Adrionna, a sixth grader, saw that a fellow student was cutting himself on the arm with a small X-Acto blade. She stepped in immediately to stop this self-destructive behavior and took the blade away. Then she threw it in the trash and told a teacher.

And that’s when Adrionna got in trouble. Rather than being lauded for her decisive and responsible action in an emergency situation, she was slapped with a ten-day suspension for being in possession of a dangerous weapon on school grounds, with a recommendation that she be expelled.

In other words, had Adrionna not saved this boy from serious harm when no adults were around, and not been honest and truthful about holding the blade for the amount of time it took to seize it from the boy and deposit it in the trash, she wouldn’t have had any problems.

Rachel Harris, Adrionna’s mom, was shocked and contacted the school system. No one would even return her calls until a local television station got involved, and after a few days the heroic young lady was allowed to return to school. That doesn’t make this stupidity any less appalling.

On the adolescent level, the purpose of punishment is to discourage behavior that is harmful, dishonest or disruptive. By punishing courageous and upstanding young people like Erin Cox and Adrionna Harris, are the Massachusetts and Virginia school authorities actually saying they want to discourage the behavior they displayed; that is; selflessly saving their friends and classmates from demonstrable harm?

As we keep asking in these situations: What is your objective? And shame on all of those officials who just don’t have the imagination to get it. Is it that difficult for these shapers of young minds to determine intent when they’re deciding whether a given situation requires discipline?

Adrionna and Erin are now members of a small but growing club of adolescents who display a lot more intelligence, wisdom and character than the adults who are supposed to be responsible for their education.

A reporter from WAVY asked Adrionna if, knowing what would happen to her, she would do the same thing again.

“Even if I got in trouble, it didn’t matter because I was helping him,” she replied. “I would do it again even if I got suspended, yes.”

Now that’s character. And an example a whole lot of adults could learn from.